De paardenvissers (horse fishermen), or de garnaalvissers te paard uit Oostduinkerke (the shrimp fishermen on horseback from Oostduinkerke), are a cultural tradition in Belgium. It is believed that men (and now women) fished for shrimp in the North Sea from the backs of horses since the early 1500’s. At its height, shrimp fishing from horseback was done along most of the North Sea’s coast, but it is a tradition that has largely disappeared. For some time, it was prohibited by the King. I also suspect the emergence of more modern methods had an influence on the decline.

Now, only a small group of paardenvissers remains and they are in Oostduinkerke, a village in the town/municipality of Koksijde, Belgium. Their numbers have fluctuated over time, but they have increased recently. The Paardenvissers were added to UNESCO’s list of “intangible cultural heritage” in 2013 which has helped preserve and highlight their cultural significance. 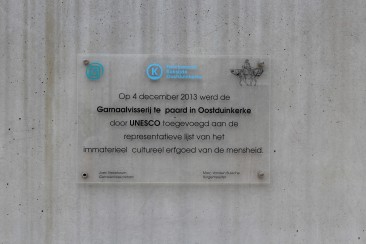 The city of Koksijde also seems to have recognized their value to the tourism industry. With families involved in the business, young people are learning the trade. With this, and the support of the city, the Paardenvissers seem to be a preserved heritage that will be around for a long time. 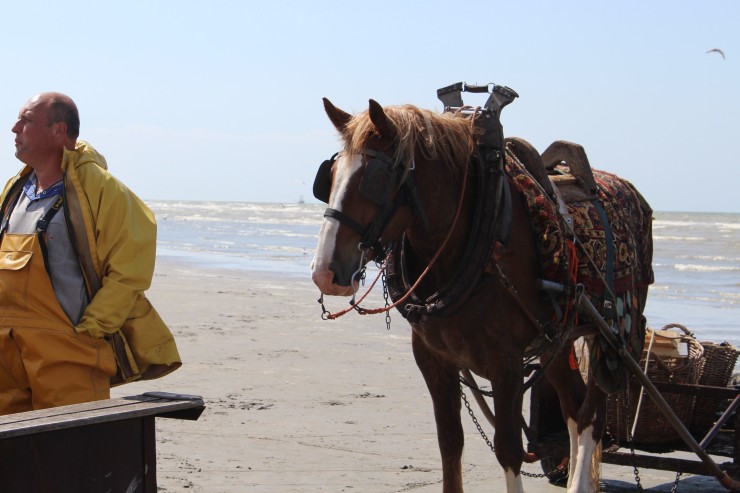 I follow the Paardenvissers Facebook page and I learned that they give public demonstrations on a scheduled basis. Those are listed on a calendar on their website. Before I had a chance to see one of those, we went to the annual Garnaalstoet (shrimp parade) in Oostduinkerke in June 2017.

Belgians love a parade. Many towns have annual parades like this, all celebrating something unique to their local history. Most include “giants”, puppets, costumes, horses, floats, etc. The Garnaalstoet celebrates shrimp, a main product of the region. The Paardenvissers are a primary feature of it.

It was wonderful to see the Paardenvissers in the Garnaalstoet, but I was still eager to see them at work in the sea. That finally happened in May 2018 at one of their public demonstrations. It’s wonderful to see a cultural tradition like this at work, but more than anything, I just loved seeing these amazing horses! They are huge, powerful, and earnest. Horses are such emotional and expressive animals. I could watch any of them doing anything anywhere and enjoy it. 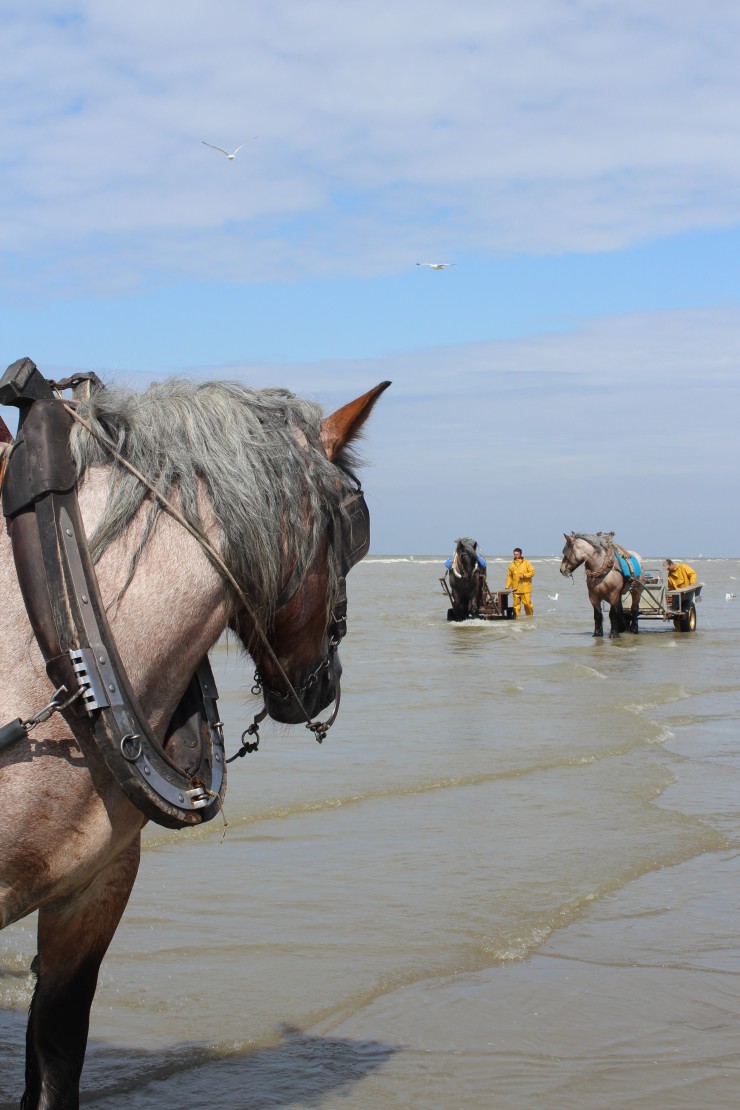 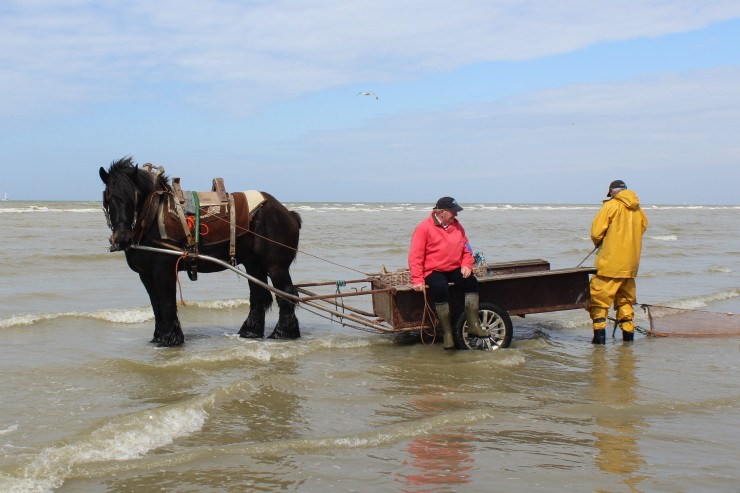 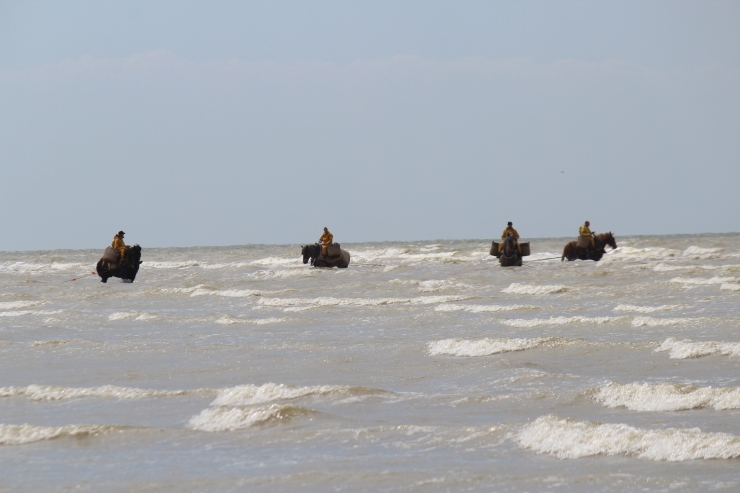 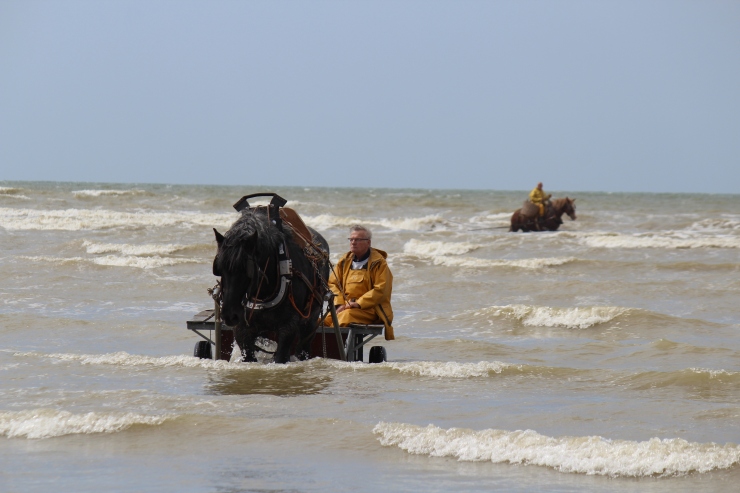 I’ve ridden a lot of horses in my life and can’t think of any of them that would willingly go into an ocean like this! The bond between a horse and rider is important, and when it is strong, it is special. There must be a lot of trust coming from both parties when the pair willingly goes up against the forces of the ocean together. Additionally, these horses were calm and tolerant of the public crowds. They were awesome. 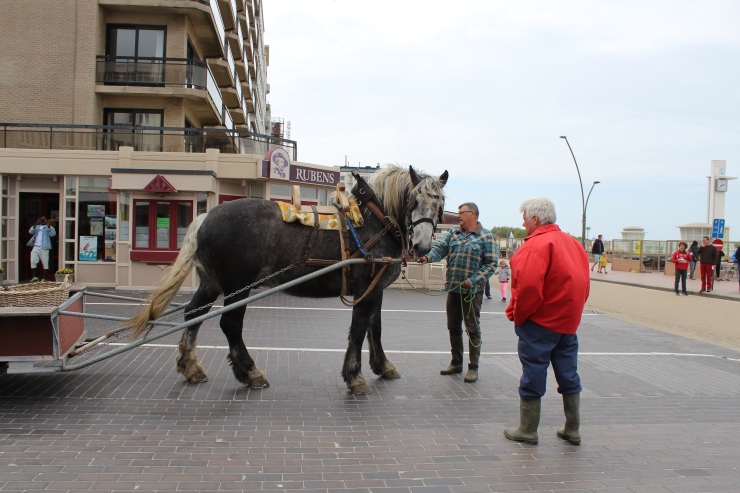 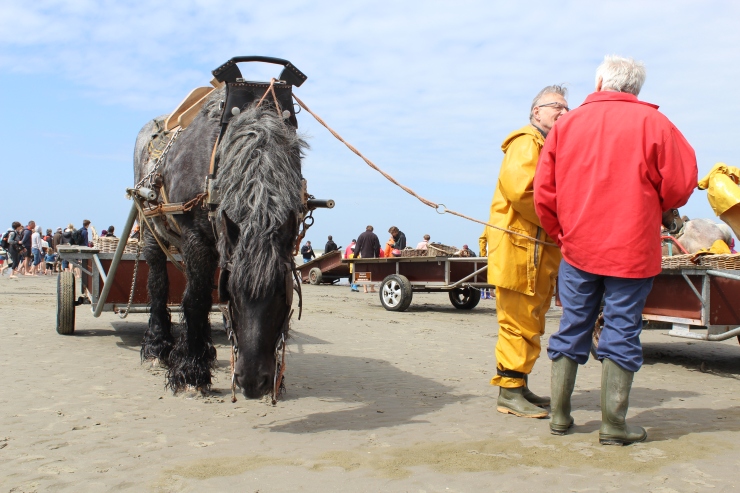 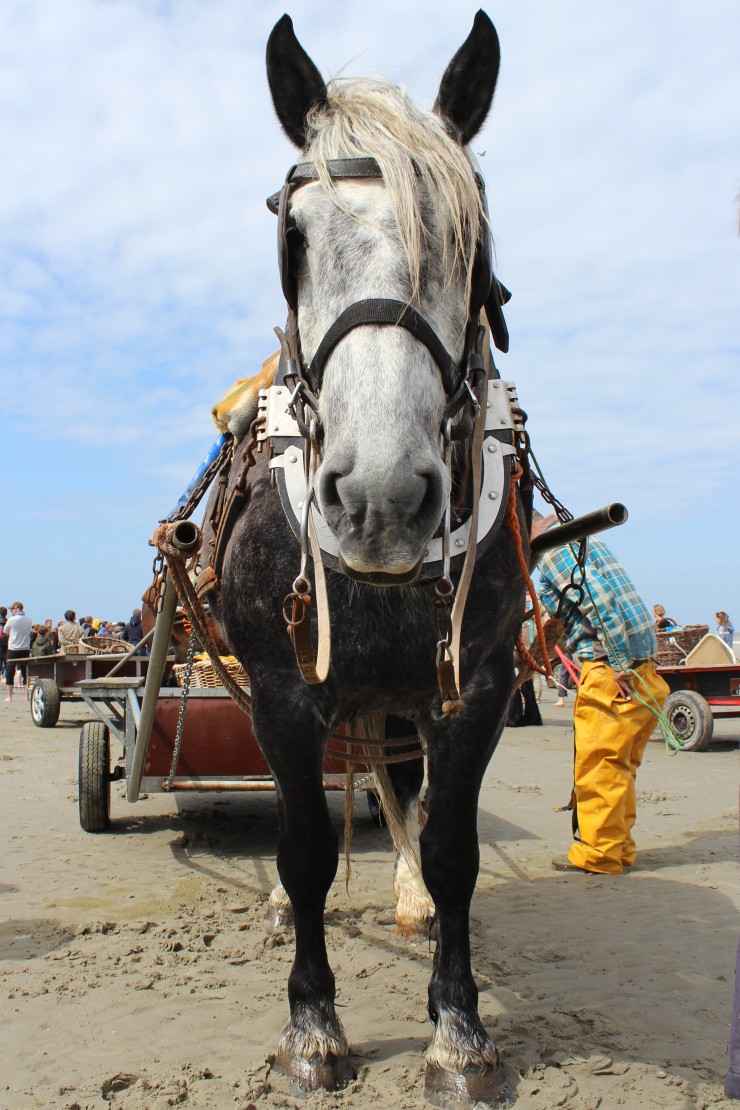 If you get the chance to see them in person, I recommend it. Just be prepared to get wet and sandy. It was low tide when we saw them so we had to cross tidal pools and a lot of wet sand to follow them out to the sea. I recommend tall rain boots or waders, or bare feet/legs. It was totally worth it though! It’s wonderful to see a community put such value in a cultural tradition and share it with the public, especially with these big beautiful creatures.

This site uses Akismet to reduce spam. Learn how your comment data is processed.

© Rebecca Bramlett and RB Abroad, since 2015. Unauthorized use and/or duplication of this material (images, text, and any other content) without express and written permission from this blog’s author and/or owner is strictly prohibited. Excerpts and links may be used, provided that full and clear credit is given to Rebecca Bramlett and RB Abroad with appropriate and specific direction to the original content.