We have passed through Dover several times on our trips to the U.K. There are a few things in Dover that we kept saying we should go back to, namely, the White Cliffs and Dover Castle. On our most recent trip to Legoland Windsor in July 2018, we decided to stay the night in Dover before coming home so that we could see them, and see what else the town has to offer.

It seems like a tourist visit to Dover would be incomplete without visiting Dover Castle. The castle is an English Heritage Site. It was built late in the 12th century by King Henry II. Inside, you can visit its recreated kitchen, living quarters, towers, halls, chapels, and more. It is nicely presented in a fun way for kids and adults to see what life in the castle was like. When we purchased our entrance tickets, we received a kid’s activity brochure to complete as we toured the castle. I always love when places have things like this to make it more interesting and accessible to children.

In addition to seeing the castle as it would have been used as a home and a fortress, the grounds also have the Wartime Tunnels, Bell Battery, the Princess of Wales’s Royal Regiment and Queen’s Regiment Museum, a Roman Lighthouse, and the Church of St Mary-in-Castro Dover which dates back to somewhere between the 4th and 10th century (archaeological records vary).

Dover Castle was a great place for a family visit. English Heritage does a wonderful job with their sites. What’s not to love about a well restored castle?

What I really wanted to see in Dover more than anything else was The White Cliffs of Dover. We had seen them from the water when we previously rode the Ferry to the UK, and from the car when we arrived by the Eurotunnel. But I wanted to see them, from them!

The Cliffs are a National Trust site. There is a Visitor Center at the entrance, along with a gift shop and coffee shop/tea room. They also had a used book sale going on, just like the National Trust site at Avebury when we visited there. Proceeds from the book sale benefited the trust for the restoration of the Cliffs. I have to say, I love this idea!

The Trust suggests a few ways to enjoy the Cliffs. Their brochure suggests 1-, 3-, and 4-hour itineraries to enjoy the site, including the hiking trails that are 20, 40, and 50-minute walking routes. We did not go as far as I would’ve liked, but the views were stunning and so worth seeing in person.

One unexpected but fun find in Dover was a Banksy mural that we didn’t know was there. We first passed it on our drive into town. My husband saw it first and pointed it out. We’ve grown an appreciation for street art since living here, particularly because there is an abundance of it in Gent.

When I first saw it, it looked familiar, but I couldn’t recall from where. Maybe I saw something about it online when it was first painted. We went to a Banksy exhibit in Antwerp last year, but I don’t think I saw anything about it there. Regardless, something in my brain suggested it was a Banksy, so as soon as we settled in our hotel, I looked it up online and confirmed that to be true (here is one of many articles online about it). It is Banksy’s first artistic comment on Brexit. We walked back to it the next morning to see it up close. It was fun to see in person! 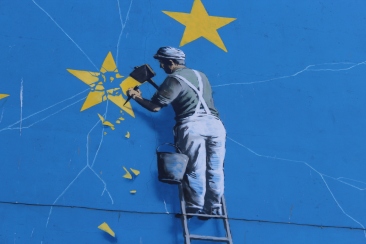 We stayed at the Hubert House Guesthouse in Dover. It was an old-fashioned guesthouse that felt a bit like staying at Grandma’s house instead of in formal lodging. Our room did have a private/en-suite bathroom, but it was the kind of place where I would not be surprised if some rooms did not. The room and furnishings were comfortable. The proprietor was very friendly. Breakfast was included and was good, fresh, and plentiful. Dover is not huge, so I doubt much could be located inconveniently, but I can say the Hubert House was in a convenient location to everything we wanted to see and do.

I really don’t have amazing meal stories to share from Dover. On our way there, we grabbed dinner at a roadway rest stop. This sounds kind of depressing, but my American friends should know that European rest stops tend to have nicer dining options than what we have in the U.S., at least the highways in the U.S. I am accustomed to. No, they still aren’t five-star dining options, but they tend to have sit-down dining options slightly better than fast food. Anyway, I only mention our stop here at the Clacket Lane Road Services because I was impressed by a small display they had about the site. Apparently, during roadworks and construction, archaeological excavations have taken place here and they have verified the area as part of the Roman Road. The display had some interesting information and artifacts. That’s not something you see at your average motorway stop!

We had a filling English breakfast at the Hubert House, and then lunch (pasties) at one of the cafés at Dover Castle. I had hoped to get a good meal of fish and chips somewhere near the water, but it would not have been as convenient to find somewhere else to eat given our schedule.

After less than 24 hours in Dover, it was time to get back to the Eurotunnel and head home.

I am sure there are things in Dover we don’t know about that we missed. That said, we did everything that was on my to-do list for our quick stay there. The only thing I regret is not walking further at the White Cliffs to see the Fan Bay Deep Shelter (underground tunnels from World War II that require a timed ticket for entry) and the South Foreland Lighthouse. Maybe we’ll have a chance to do that during a future pass through Dover.

I am glad we made this quick stop on our trip and can recommend a stay in Dover, at least a quick one. Don’t just pass it by before or after a Ferry/Eurotunnel trip!

This site uses Akismet to reduce spam. Learn how your comment data is processed.

© Rebecca Bramlett and RB Abroad, since 2015. Unauthorized use and/or duplication of this material (images, text, and any other content) without express and written permission from this blog’s author and/or owner is strictly prohibited. Excerpts and links may be used, provided that full and clear credit is given to Rebecca Bramlett and RB Abroad with appropriate and specific direction to the original content.